Yesterday the sad news of Terry Pratchett’s death was released. It was a shock despite knowing that he had been diagnosed with early onset Alzheimer’s. I have loved Pratchett since reading Good Omens (1990), the novel he wrote with Neil Gaiman, in the early 90s. It was interesting to see how many readers came to Pratchett in their early teens- I was in my early 20s and had just graduated, working three low-paid part time jobs and feeling adrift. The fun of the storytelling hooked me, and I have read the Discworld novels repeatedly. 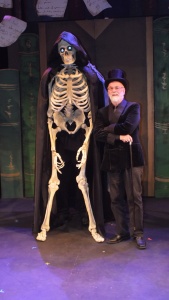 The literary “establishment” have always had an ambivalent attitude to popular literature, fantasy in particular (see Kazuo Ishiguro’s concern that his latest novel might be seen as fantasy). Last week’s A Good Read podcast had me audibly snorting on the train from East Croydon to Thornton Heath, as presenter Harriet Gilbert referred in a slightly embarrassed manner to Discworld novels as books for teenage boys. This made me annoyed for two reasons- firstly that all literature is genre literature, including literary fiction, and secondly that pop culture liked by teenagers is so often dismissed as banal, silly or, in the case of books read by teenage girls, morbid. Pratchett won the Carnegie for his Discworld children’s book, The Amazing Maurice and his Educated Rodents (2001) and in his acceptance speech pointed out that he wrote about serious subjects, but the lightness and comedy, as well as the fantasy setting, led to his lack of recognition by the literary establishment.

Terry Pratchett wrote about many different sectors of society, but I particularly enjoyed his books about the Lancre witches, in particular those featuring Tiffany Aching. Tiffany is a tenant farmer’s daughter, whose intelligence, common sense and ability to see what is really there, rather than what she wants to see, leads her to defeat Jenny Greenteeth the river monster and the Fairy Queen in The Wee Free Men (2003). She is scorned and overlooked because of her age (9 in the first book) and her ordinariness. The books show Tiffany growing up and making mistakes- but not suffering for them. Throughout the series, Pratchett makes serious points about the position of marginalised women- elderly women accused of witchcraft, and in I Shall Wear Midnight (2010) abused young women.

Fans do have another Tiffany book to look forward to, and in the past Pratchett expressed hope that his computer game narrative writer daughter Rhianna would continue Discworld in some way. But in any case, farewell Sir Terry, and thanks for all the fun.

Tansy Rayner Roberts, writer and critic, has written some great posts about women in Discworld. You can find them here

One thought on “Sir Terry Pratchett- goodbye, and thank you.”